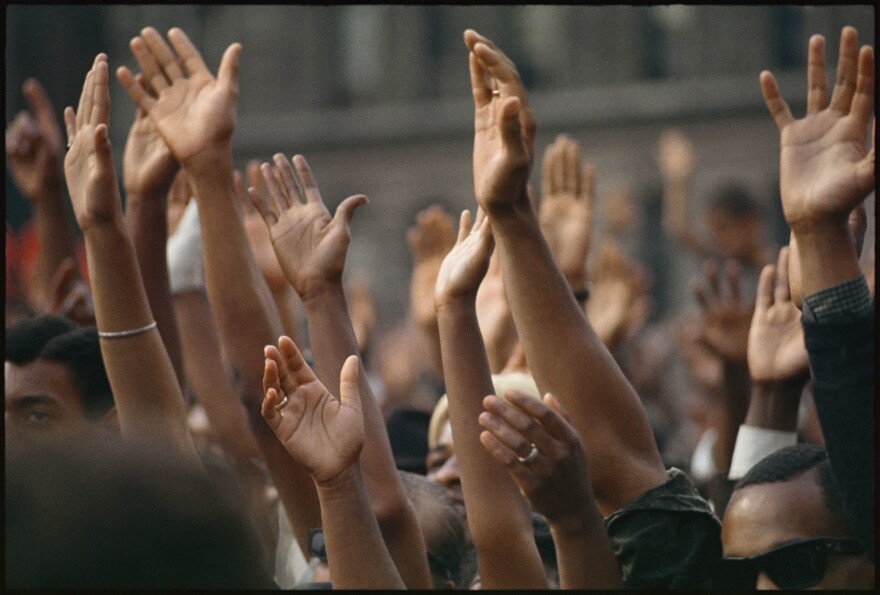 In the late 1940s, Life magazine published a multipage photo spread titled “Harlem Gang Leader,” depicting the gang wars that had taken control of the New York neighborhood. Through contemplative, yet often violent portraits of the gangs, photographer Gordon Parks captured the complexity and nuance of an area that was often misjudged.

The photo essay also landed Gordon Parks a full-time position at the magazine, making him the first Black photographer to be hired on staff. This work solidified what would become his lengthy and prolific career not only as a photographer, but also as a filmmaker, novelist, musician and poet.

Parks grew to be one of the country’s most celebrated photographers. He was best known for photographs of American life, but mostly of the Black experience. With his camera he captured the cruelties he saw in society and used photos as means for protest. His photos of segregated America are part of an imperative documentation of the racial divide in the country.

Late last month, Howard University announced that it acquired an extensive collection of Parks’ photographs. Spanning five decades, the collection of 252 images is organized into 15 study sets meant to give students a wide range of material to be examined.

“You could have a film studies class, a race class, a fashion class, and a U.S. history class all looking at the same pictures and understanding different components of why these pictures are so important,” said Peter Kunhardt Jr., executive director of The Gordon Parks Foundation.

Parks was born in Kansas in 1912 into a life marked by poverty and racism. Although he had no formal training in the areas in which he excelled, he credited his good ears, his passion for listening to music, and what he called “a gift” in making him the artist he was. Parks was self-taught in most of the art forms he practiced: listening to other composers’ music to practice piano and capturing images of seagulls in the sky and reading camera manuals to practice photography.

He used to say he used the camera as a weapon, shining a light on what would otherwise go unnoticed. One of his most famous photographs shows a family gathered around a segregated water fountain in Mobile, Ala., in 1956.

Parks’ pictures showed the struggle of Black Americans to gain equal rights during the civil rights movement, as well as depictions of poverty and racism across the country.

In fact, his autobiography is titled A Choice of Weapons, because Parks said that his upbringing could’ve well forced him to turn to guns or knives, but he chose the camera instead.

“I pointed my camera at people mostly who needed someone to say something for them. They couldn’t speak for themselves,” he said in an interview with Charlie Rose in 2000.

But as he became notable for his photos highlighting racial and class issues, his work for Life also won him a reputation as a fashion photographer. He portrayed Paris fashion in 1949, followed Bettina Ballard, Vogue’s fashion editor, and depicted the influence of the Spanish on American women’s fashion. His fashion photographs appeared in prestigious magazines like Vogue, Glamour and Life. In 1952, Parks was assigned to Life magazine’s Paris bureau, where he would go on to photograph French life and fashion.

He also directed the 1971 classic Shaft, the first Hollywood Studio Black action film, and The Learning Tree, an adaptation of his autobiographical novel about his life in Kansas.

Parks established his first connections with Howard University in 1942. The campus and students of the historically Black university in Washington, D.C., were frequent subjects, and the institution embodied many of the same values that his work came to represent.

Kunhardt Jr. said he hopes that through this collection, students will be able to understand the importance of Parks’ legacy.

“Howard has a very large community of like-minded individuals who will continue to appreciate and understand why Gordon Parks is so important,” said Kunhardt Jr. “It feels to us that the community of Howard University is a very important place to keep that legacy vibrant.”

The collection, a combined gift and purchase, will be housed in the Moorland-Spingarn Research Center, and is meant to support initiatives that provide access to Parks’ work and vision. The Moorland-Spingarn Research Center makes many of its collections available to the public online, but researchers and students can also request in-person appointments based on the latest COVID-19 protocols.

“Mr. Parks was a trailblazer whose documentation of the lived experiences of African Americans, especially during the civil rights period, inspired empathy, encouraged cultural and political criticism, and sparked activism among those who viewed his work,” wrote Dr. Wayne A. I. Frederick, president of Howard University, in a press release. “Having a collection of his timeless photographs in the Moorland-Spingarn Research Center will allow Howard University faculty, students, and visiting scholars to draw on his work and build upon his legacy of truth telling and representation through the arts.”